Obituary for Carol A. "Perky" Perkins 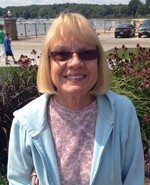 Carol A. “Perky" Perkins, age 70 of Janesville died unexpectedly at her home on Friday, September 13, 2019. She was born in Janesville on September 4, 1949, the daughter of the late Lyle and Theresa (Piekarski) Stavn. Perky graduated from Janesville High School in 1967. On February 28, 1970, in Janesville she married Garry A. Perkins and together they had two children. Perky started working at Parker Pen shortly after graduating from high school, retiring in 2010 with over 42 years of dedicated employment.
She is survived by her two children: Eric (Tracy) Perkins of Janesville and Mark (Melinda) Perkins of Madison, and their daughter, Emma who she adored; her brother: Kevin Stavn of Baraboo, WI; and her husband of 49 years Garry Perkins of Edgerton. She is further survived by her many friends from Parker Pen, many who she continued to stay very close to; and other relatives.
Private services were held.

All rights reserved. This obituary is also archived at obittree.com