To share your memory on the wall of Rev. John Splinter, sign in using one of the following options:

Provide comfort for the family of Rev. John Splinter with a meaningful gesture of sympathy.

We encourage you to share your most beloved memories of Rev. John here, so that the family and other loved ones can always see it. You can upload cherished photographs, or share your favorite stories, and can even comment on those shared by others.

Posted Nov 08, 2019 at 10:46pm
I've always admired John as a kind, thoughtful, and intelligent person. I've been out of touch for awhile, but I remember sharing many stories with each other about nature, gardening, bird-watching, or volunteering at Riveredge Nature Center.
Comment Share
Share via:
GW

Posted Oct 28, 2019 at 08:52pm
This great picture reminds me of when we were kids and John sang "Frosty the Snowman" for a Christmas program at school. He had some man's beaver hat that had to be stuffed with paper so it didn't fall over his face and a corncob pipe in his hand. Every time I hear that song, I picture him thumping across the stage at the appropriate times. He was probably in first grade. Good memory.
Comment Share
Share via: 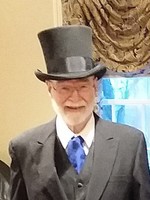