To share your memory on the wall of Charlene Scott, sign in using one of the following options:

Charlene had worked at Panoramic before going to work for LeMans Corp., where she had a lot of friends. Charlene was a former member of the Moose Lodge. She was a huge Green Bay Packers fan and enjoyed hunting and fishing with John.

A Funeral Service will held on Monday, February 24, 2020 at 5:30 pm at the Whitcomb-Lynch Funeral Home, 21 S. Austin Rd. Visitation will be on Monday from 3:30 to 5:30 pm at the funeral home. Please visit www.whitcomb-lynch.com to send condolences to the family.
Read Less

We encourage you to share your most beloved memories of Charlene here, so that the family and other loved ones can always see it. You can upload cherished photographs, or share your favorite stories, and can even comment on those shared by others.

Posted Feb 20, 2020 at 03:46pm
Tom and Family- Our deepest sympathies during your time of loss. From everyone at C.M. Morris Group

Loving Lilies & Roses Bouquet was purchased for the family of Charlene Scott. 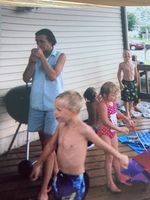